Growing up without a mother or father in your life is terrible for anyone. Especially when you’re most likely to end up in a system of change. Forever moving from home to home, not knowing what to call home anymore from the number of foster families you have been a part of. Along the line, what if a biological guardian came back into play? What would you do; would you go back to them with arms wide open or would you continue with your life and how it is progressing without them?

Olivia Newman’s directorial debut First Match pursues the character of Mo (Elvire Emanuelle), a challenging teenage girl who goes down the path of becoming part of the wrestling team within her school. Having not grown up with either parent in her life, she has moved from home to home, trying to find comfort somewhere in which she can find love and fulfillment. One night, walking home from practice with her best friend, Omari (Jharrel Jerome), she discovers her biological father, Darrell (Yahya Abdul-Mateen II) has been released from prison, now working in a local takeaway. With the strength to get a college scholarship, does stick to the right path or get distracted by what could have been? 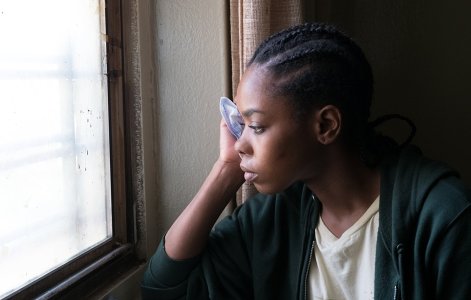 With clothes flying out of the window, it is instantly established that the character we are about to encounter has a troubled past. Olivia Newman captures the urban surroundings of Brooklyn tower blocks through the use of hand-held imagery, making the film more personal and visually connecting. Elvire Emmanuelle proves she is a strong character and not someone to mess with right from the word go. Luminous green nail extensions, bright red highlights and an attitude that could scare off most lions, she pulls off a believable yet unique performance. Jharrel Jerome is an unlikely support but manages to convincingly show brotherly characteristics. You would think right from the offset they were meant to be siblings but with Newman’s clever directions, he not only is a brother but shows fatherly instincts to a lost soul within Emmanuelle’s character.

As much as Newman has successfully created a Netflix Original hit, there were a few inconsistencies and errors she made as a directorial newcomer. A few shots were out of place which leads to disconnection. Very basic mistakes, not thinking about the space around her actors, leading to continuity errors, people magically disappearing in the background. It sounds very picky of me to notice these mistakes but when you are highly involved with the story that is being displayed, you will start to notice.

To come from being a short to full-feature length under Netflix, First Match is highly engrossing viewing experience. Using an underrated sport within society and highlighting the strength and power of the female species is extended under Olivia Newman. Looking into the detail of the narrative, you begin to see the hidden stories she is trying ensue on her audiences. The hidden sub-plots unravel throughout, something most films seem to make so predictable from the beginning but wasn’t seen until the end with Newman and her well-casted feature. An interesting, unique and fresh response to the current political climate. First Match starts to show that women are the future of the film industry.