To find your daughter’s killer, you will do whatever means necessary to capture them. But, what if your local police force is incapable of pulling their fingers out of their arses to get them? You would have to take matters into your own hands, even if that means displaying a rather large message to the public eye to get them to listen to you.

From the director that brought you In Bruges and Seven Psychopaths, Martin McDonagh tells the story of Mildred (Frances McDormand), a mother who is challenging the local authorities over the death of her daughter to try and get them to resolve the matter. Putting three billboards just on the outside of town, however, seems to cause a whole lot more trouble than is needed, especially for Chief Willoughby (Woody Harrelson) and Dixon (Sam Rockwell), but will the matter ever get resolved or will the town be ripped apart by these three billboards? 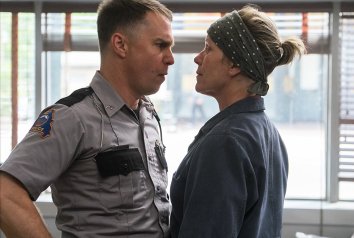 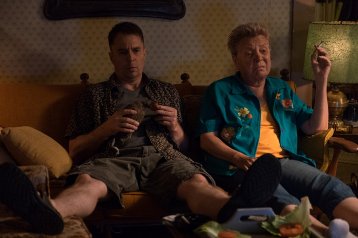 Martin McDonagh is known to have a dark sense of humour when it comes to his direction and that doesn’t stop there with Three Billboards Outside Ebbing, Missouri. Unexpected laughter throughout made the film thoroughly entertaining to watch, giggling at inappropriate jokes that you didn’t think would get to you. Frances McDormand is pure-class within her role as the bad-ass mother who doesn’t give a fuck what happens to the town. A hardcore edge to what is seemingly nice from the front. Sam Rockwell went from being a dumb, inconsiderate buffoon to a changed man by the end. You will rarely see a character change so much throughout a film but Sam Rockwell does it with ease, making it virtually impossible to predict what is going to happen next to the man. Two leads that deserve the attention they are receiving. That’s not all. Each character had their part to play in making this film a success. Support from the likes of Woody Harrelson and Peter Dinklage (as James) makes the award-winning film. McDonagh writes in ingenious lines for the characters, using their appearance to make stereotypical jokes no one should be laughing at but you just find yourself sniggling away in the back of the cinema anyway. This wasn’t your typical “laugh-out-loud” humour but it kept you content throughout, especially with the more serious undertone lining it all together.

From the outset, you know shit is about to go down. No backstory is explained or gone into thorough detail but that is what makes these three billboards within the film ever more significant. As much as McDormand and Rockwell are the leads within the film, those three billboards were a clever dynamic for the cast to gather around. They were at the centre of whatever was going on within Ebbing, Missouri. A piece that’s so simple yet constructs a masterpiece to form around it. I was fascinated to see how the story ended, constantly questioning the roles of each character, seeing how they played out. I’m intrigued to know the process McDonagh went through to form such a well-oiled machine.

I am not surprised this is receiving the attention it is currently getting. With 4 Golden Globes already to its name, I am expecting to see more added to that cabinet once the BAFTA’s have been awarded. I am yet to watch other nominations but it will be difficult to defeat great direction from McDonagh and class acting from McDormand and Rockwell. We shall see…