Growing up, for me, it was a choice between either becoming a fan of Star Wars or James Bond. With my dad being a massive fan of the sex-driven, gun-toting star, it was embedded in me from an early age that I must watch all of the James Bond movies, especially the Roger Moore features. Personally, I never really gained an interest in the Star Wars franchise and followed George Lucas’ master plan to take over the world. I may not be educated in the way of the force or the force may not be with me when it comes to watching these films but I thought I might give it a watch anyway.

Star Wars: The Last Jedi follows on from The Force Awakens as Rey (Daisy Ridley) tries to control her newfound abilities and is in need of guidance from the master himself, Luke Skywalker (Mark Hamill). As Rey is on her journey of discovery, The Resistance is preparing to do battle with the First Order. Finn (John Boyega) wants to be reunited with Rey and is on a journey to try and find her after being in an incubator for a long time. On his journey, he meets Rose (Kelly Marie Tran) who decides to help Finn and becomes involved with a scheme devised to destroy the First Order. After killing his father Han Solo, Kylo Ren (Adam Driver) is under pressure to assure Snoke (Andy Serkis) that he is capable of being a part of the First Order and with General Hux (Domhnall Gleason) being in his shadow, he needs to prove himself worthy of the position. 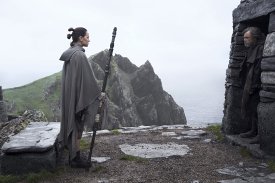 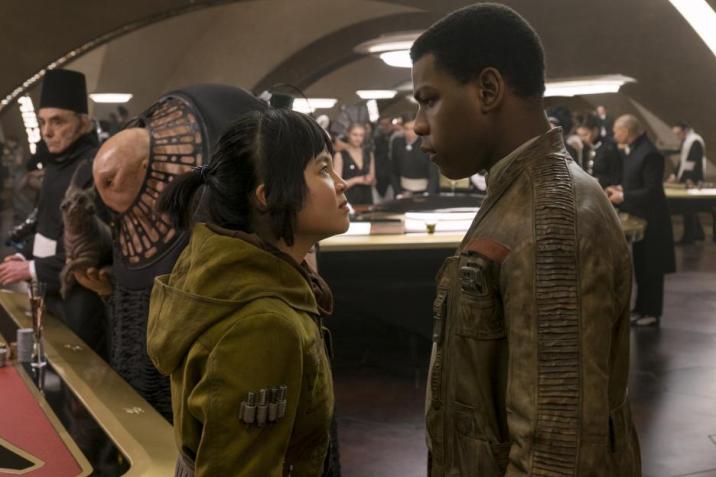 Director Rian Johnson has been given the opportunity to keep the Star Wars franchise alive, especially after the success of The Force Awakens from J.J. Abrams. With not being a hardcore fan of the franchise, I could watch this film from a neutral point of view. Most would be utterly fascinated by the introduction of old characters and reminisce about episodes past but I’m not going to let that get to me. With my slight knowledge of previous episodes, I think I can cast an opinion on the film without offending a whole fandom.

Now, tell me if I’m wrong, but aren’t we watching the same thing happening again? The story is very similar, to my knowledge, of what has happened in previous episodes. Kylo Ren is trying to get Rey to join the dark side with the ways of communication through the force. To my knowledge, didn’t Darth Vader try and get Luke to join the dark side? (If you’re reading this and you’re a huge Star Wars fanatic, please correct me). Also, like Luke, Rey decides to reject the offer and stay with the resistance. It’s like a straight-up repeat, apart from the fact the characters have changed. Kylo Ren is Darth Vader, Rey is Luke Skywalker, Finn is Han Solo and Chewbacca is obviously Chewbacca. I was expecting to see something completely different. At that point in the film, it would have been made more exciting if Rey did join the dark side. You know, throw a curve ball in there. She’s in a constant fracas with both sides trying to obtain “The Last Jedi” and we don’t know until the end where her heart lies. I understand, for the continuation of the war, that both sides must exist but there is nothing new. Spoiler: Yoda comes back. I’m not entirely sure why. From what I understand, Luke is now apart of the force and has been recruited by Yoda’s wise knowledge and power. Finn was a hero in The Force Awakens but becomes a failure in The Last Jedi. Overall, it’s confusing.

Where have the crazy, inventive characters gone from the franchise? Okay, having a penguin bird thing (whatever it’s called) is great but that is literally just to sell on to children for Christmas as a cute, cuddly toy. As with the ice foxes, there is no imagination that really goes into that. A community that is built on fantasy and imagination, it was partially lacking in areas. You’d expect some wild characters but instead, a majority of them were all human-like.

Overall, it’s a good film. The Star Wars fandom is in full force and is extremely happy with what the film has given them to think about. Rey is no longer the last Jedi as the force is not something that is genetically needed. It can be found in any child, not always one that has descended from other Jedi’s. Great clickbait there for people to go and see the film. For me, I continue to not be a massive fan of Star Wars. My interest will be there to see the films but never to be fully invested in what they have to offer. When it comes to reviewing, I may have to leave that to the hardcore fans. I shall stick to James Bond and his violent, sexy gun wavering ways.